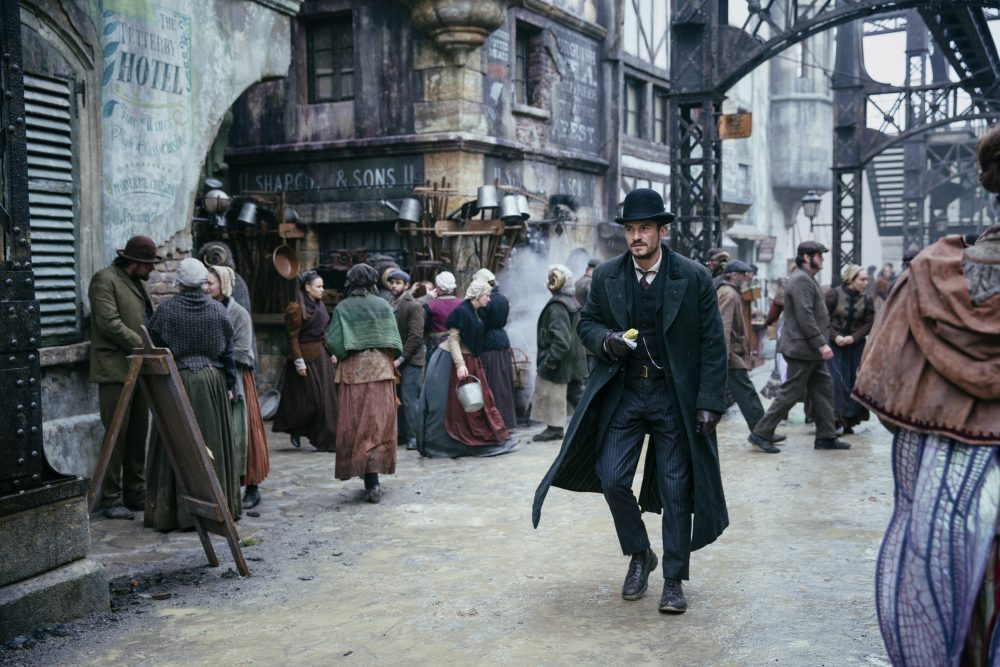 With Carnival Row, Amazon’s betting you’re craving fantasy, but with a packed television field, is it worth a watch?

It’s very clear from the first scene of Amazon Prime Video‘s splashy “Carnival Row” that Amazon has invested in the show. The CGI-heavy world of the Burgue is a late Victorian/steampunk feast for the eyes. The show has also already been renewed for its second season before it premieres leaving little doubt that Amazon is banking on its success.

We learned at San Diego Comic-Con from executive producer Travis Beacham (Pacific Rim) that “Carnival Row” has been in development for seventeen years (though things only really starting moving about five years ago). Beacham executive produces with René Echevarria (The 4400) (the show runner) and the season premiere even boasts Guillermo del Toro as a writer. Del Toro was originally supposed to oversee the entire project, but needed to step away due to conflicts with his filming schedule. Pedigree aside, there are a lot of things streaming. Should “Carnival Row” be added to your list?

The series begins with a backstory that relies heavily on the immersive world-building show does best. In a war between men the denizens of The Burgue and The Pact lay waste to the homeland of the Fae. This causes a massive refugee crisis as The Pact makes Tirnanoc unlivable. Fae, Faun, and Centaur alike flee to The Burgue and wind up in a Fae slum called Carnival Row. The world is incredibly detailed and fully immersive and not one stone was left untouched. No water bottles on these tables! The sets and costumes as well as the seamless CGI integration were one of the show’s greatest strengths.

We meet Vignette (Cara Delevigne) first. She’s a plucky faerie who winds up in The Burgue as the indentured servant of Ezra Spurnrose (Outlander‘s Andrew Gower) and his spoiled sister Imogen (Tamzin Merchant). Vignette is pining over the loss (so she thinks) of her love Rycroft “Philo” Philostrate (Orlando Bloom). Philo is an orphaned soldier and now an Inspector investigating a strange Row murder. Philostrate’s journey propels the show forward despite a strong ensemble cast. David Gyasi plays Agreus Astrayon, the wealthy Faun neighbor to the Spurnrose siblings, to their horror. And Jared Harris plays the beleaguered Chancellor Absalom Breakspear.

Breakspear has his own troubles, both politically and at home. He’s butting heads with rival Ritter Longerbane (Ronan Vibert) and along with his wife Piety (Indira Varma), has trouble reining in his spoiled son Jonah (Arty Froushan). Carnival Row is able to move seamlessly between plot points and doesn’t struggle under the weight of its large cast. There is plenty of plot here to go around, and that’s both a strength and a weakness of the show. Because of the sheer number of ideas here, the show’s focus is unclear.

Philo and Vignette have the majority of the first season screen time so we assume the creators meant to focus on them. Carnival Row dedicates an entire episode early on to the romance between Vignette and Philo to give us investment in it. But Bloom and Delevigne don’t have great chemistry, and it’s hard to believe in their romance even after the full episode. The stakes in their relationship keep building then stalling so we never cared whether they’re together or not. In combination with their lack of chemistry, the romance is one of the least enjoyable parts of the series. They’re far more interesting apart than together.

Thankfully the show more than just its love story, and it’s in the mystery it shines. Emo Rycroft Philostrate spends his time solving a Jack the Ripper-esque murder reminiscent of BBCAmerica’s Ripper Street. Bloom’s brooding detective is by far the most developed of the series and because of this Bloom shines. Philo has a clear backstory with enough of his own mysterious past to keep us interested. Gyasi’s Faun Agreus has hints of an intriguing past but is never developed further.

When allegory is subtle as a hammer

But it’s not simply a mystery either. Carnival Row spends a massive amount of time on an immigration allegory that pervades the whole series. It brings to mind the current political climate while simultaneously evoking the 18th & 19th century Irish immigration story. Jared Harris is a Chancellor sympathetic to the Fae plight since it’s political maneuvering on the part of the human world that has made them refugees in the first place. He squares off against Longerbane who takes the opposite stance, and even Longerbane’s daughter Sophie winds up involved.

Creator Beacham told us at San Diego Comic-Con the current immigration parallels are purely kismet because the show has been in development for so long. They permeate the entire series but never seen to go far enough. While the racial allegory is hardly subtle, the political intrigue itself is well done. The racial and social issues the show tackles on their own (including a really strange and unexplained group of self-flagellating fauns) are a bit muddy. Sexism presents, but oddly. Women have very little agency in The Burgue, but can somehow hold seats in parliament?

Where the Fantasy Falls Flat

One of the show’s largest issues is the underdevelopment of female characters with Vignette as the best example. After watching all eight episodes of the series the most we can say about her is that she’s plucky. We know almost nothing about her past other than a vague sense of a profession and that she begins with an inherently strong moral compass. The social injustice of Carnival Row quickly tampers with that moral compass quickly before she becomes… angry and plucky. We could blame Delevigne, but it’s really the writing that falls short here.

Tamzin Merchant plays the only female character given much substance at all and we wouldn’t call Imogen well-developed. Merchant is charming but a lack of screen time and backstory means that it takes at least four episodes to warm to her at all. The good thing about having completely one dimensional female characters is that it makes a decent portion of what they do and say come out of nowhere, which leads to some jaw-dropping moments. We suspect some of this might be to titillate, but you’d have to ask the (mostly) male writing team.

Final Verdict: Is Carnival Row worth a watch?

Ultimately we enjoyed Carnival Row. It took about four episodes to really heat up, but once it did we were sold. The number of things going on thematically is way over the top. But we actually enjoyed it more the more insane things got. At the very least you can enjoy the inter-species sexcapades and corsets. 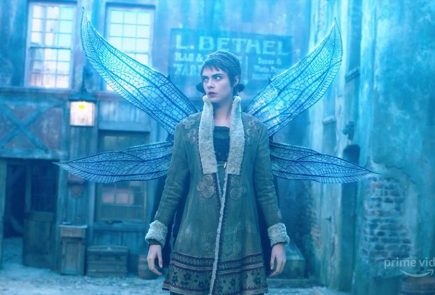