PBS’ Les Miserables is a breath of fresh diverse air 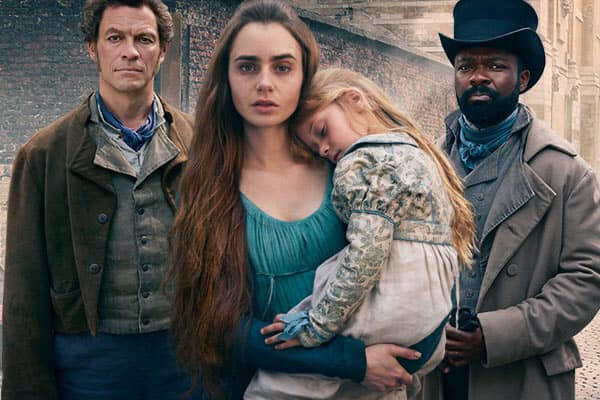 Les Misérables on Masterpiece PBS is a lot more than a non-musical presentation of a French literary classic. This miniseries brings the Hamilton revolution of casting actors of color in traditionally white roles to the small screen. Although PBS took an active part in the phenomenon by backing Hamilton’s America documentary, the Masterpiece brand has not had a period piece entirely devoted to upending whitewashed retellings of classic stories until now. Although Andrew Davies’ script often spells doom and gloom for the characters,  the joy of seeing people who look like me was well worth the anguish.

David Oyelowo as the overly obsessive Inspector Javert forces the audience from his very first appearance on the prison hulks to reconsider what they believe is “historically accurate”. Paris in the mid 19th Century was home to people with North African, Sub-Saharan, or even Caribbean ancestry through French colonial rule. Although Victor Hugo describes Javert’s background as the now racially offensive term “gypsy” (Roma is the preferred term today), he did not indicate skin color. Regardless, this indicates Javert from the beginning was someone who society had the potential to see as an “other”, especially an identity with stereotypes about crime associated with it. Viewers who attack Oyelowo’s casting not only ignore Hugo’s subtext, they also ignore that several theater productions have also casted black actors as Javert and other characters. Period drama fans should do well to remember that what many may consider “historically accurate” often reflects not only whitewashed history but modern discrimination against actors and other creatives in the industry today.

Far too often the downside to casting POC actors in period dramas is the chance of perpetuating negative stereotypes and tropes or only having one character represent an entire marginalized group. Sometimes, non-white actors are relegated to crowd scenes. Les Misérables avoids these pitfalls by featuring actors of color in sympathetic, and antagonistic roles. These characters are also not limited to one class in society. Javert’s refusal to work to upend systemic discrimination against the working class may be seen by many viewers as villainy, but there is no doubt Sister Simplice (Natalie Simpson) is a hero for comforting the sick and needy without moral judgement. Both characters are clearly of a higher social standing in Paris society at the time.

On the other side of the social spectrum, Mr. and Mrs. Thenardier (Adeel Akhtar) and Olivia Colman) Mr. and Mrs. Thenardier are clearly dysfunctional child abusers and scam artists but even their story is a subtle nod to issues within communities of color. During Episodes 2 through 4, there are some subtle as well as blatant clues, Mrs. Thenardier treats her children according to how “passing as white” they are as mixed race people. Eponine (Erin Kellyman) and her sister Azelma (Alex Jarrett) are fairer skinned and have curly hair. Poor Gavroche (Reece Yates) is left to his own devices because he has coarse hair and obvious North or even sub-Saharan features. Javert manages to throw them in jail for gang activity and other crimes later on, but sadly it was too late to serve as recompense for some of their victims. Among the working class characters of color are Favorite (Charlotte Dylan), a seamstress, housekeepers, and laborers such as Corfreyac (Archie Madekwe) on the front lines of the barricade.

A small detail that speaks volumes to the commitment  Les Misérables has to diversity in period drama is in the overall costume design. Favorite’s Regency updo is modified to accommodate dreadlocked hair. Gavroche and Eponine are not wearing hats to cover up their afros. Although some costume experts would cry foul at these styles, it is important to keep in mind many modern methods for hair straightening were not invented until much later on in the Victorian era. Balancing period techniques with styling natural black and mixed race hair is a difficult challenge given the lack of documentation for many eras of fashion but it is one the hair and makeup team handled extremely well.

The production team is the key to Les Misérables successful efforts at ending whitewashed period dramas David Oyelowo and Dominic West along with acting also serve as Executive Producers. Paraphrasing some of Oyelowo’s remarks from the NYC premiere, he said his goal was to make the world of Paris in the 1810’s through 1848 not only realistic to the time but also to modern life in the U.K. and America. Throughout his career he has tried to avoid “token” roles in productions which perpetuate stereotypes or do not take racial diversity seriously. This miniseries proves diverse period dramas are possible once everyone in charge believes in the goal of undoing years of white as the default position for “every woman” or “everyman” fictional characters.

The shocking conclusion to Javert’s storyline highlights not only the troubled era the story takes place but also how mental health in communities is still a modern day crisis. For nearly the entire series Javert never questioned the policies he was obsessed with enforcing. His entire identity is shaped by his career, day to day survival, and his obsession with Valjean’s lawbreaking took over his entire life. Valjean choosing not to take revenge and save his life completely destroyed his sense of self. It was possible for a felon to reform themselves and for a thief to give back to other people. Javert’s time among the revolutionaries upended all of his negative attitudes towards the working poor and revealed how pointless his policing was. All of his arrests were doing nothing to put money or opportunities for people like Corfreyac and Gavroche. They turned to crime and violence because the system was toxic and pointless.

His final directive letter filled with thoughtful recommendations for beat policing reforms was not only an admission that he was wrong about morality but also a sign he knew all along that he should have used his post to do more to lift up the working class. Gavroche and Corfreyac died on the front lines for justice for the working class. Javert’s suicide was not only a cry for help for mental illness but also an admission that justice is not always what you think it should be. It is also a confession that no matter how far you climb up the social ladder, you will always face reminder of where you came from. Communities of color and the working class today are still struggling with the role racism and financial disenfranchisement plays a role in worsening existing clinical depression, anxiety and related illnesses.

Hand in hand with inclusive casting are the white characters with struggles that have parallels to issues communities of color are facing today. Jean Valjean (Dominic West spent 19 years in jail for stealing a loaf of bread. Upon release, he is cheated out of compensation and his passport still marks him as a former felon ripe for exploitation by unscrupulous businessmen. Years of disenfranchisement has turned his heart to stone. The only person who treats him with respect while he is still down and out is the Bishop (Derek Jacobi). The system has made it impossible for him to get ahead without lying and theft. Sadly, his rise to be a mayor and factory owner was not to last as the long hand of the law turns him back into a wanted man. No matter how much he tries to escape, Javert and the law finds ways to threaten his attempts at stability.

The patriarchy’s role in making women miserable adds even more depth to the drama of the miniseries. Fantine (Lily Collins) starts the story as a seamstress with a steady boyfriend Felix (Johnny Flynn). He takes care of her until he realizes that his parents in the countryside have chosen an upper class wife for him. Without warning Felix abandons Fantine, leaving her no choice but to leave her daughter Cosette (Ellie Bamber) with the Thenardiers so she can find work. Valjean’s factory helps her to stay in the black but childcare payments turn quickly into extortion. She is fired after someone reveals her secret and is forced to turn to sex work for income. Fantine ultimately dies because she rejected caring for herself in order to make sure Cosette was taken care of. Valjean realizes the only way to atone for pushing Fantine to the streets is to save Cosette from mopping floors and regular spankings from Mrs. Thernandier.

Eponine rejects the patriarchal control of her father, but she struggles to find a husband to take care of her. She wants someone to love her despite her traumatic upbringing, but she unfortunately falls for someone who has eyes on someone else. Romance (or the lack of it) also causes problems for Cosette as a young woman. Marius (Josh O’Connor) is from the same social class as Felix but he rejects the royalist ideals of his aging grandfather.The looming revolution and another threat of arrest prevent the young lovers from running away together.

From the opening shot to the final scene, Les Misérables is packed with powerful performances by the leads and supporting cast. If David Oyelowo, Dominic West, and Lily Collins do not receive at the very least American TV award nominations for best acting in a miniseries, it would be a travesty. The big-budget film worthy cinematography fills in all of the rich complexities of mid 19th Century France. Who needs lyrics to set the atmosphere of a scene when there are full sized sets for everything from a private conversation to the revolutionary barricades?

As a devoted PBS viewer for nearly my entire life, every chance I get to see actors who look like myself on screen has to be cherished. I hope Masterpiece on PBS can work to bring to the US more productions like Les Misérables which persuade period drama fans to accept diverse period drama as the way forward for the genre.


Les Misérables can be viewed on PBS Passport or via Amazon Prime.

Amanda-Rae Prescott
Amanda-Rae is a frequent period drama cosplayer live-tweeter. She contributes to Blacklanderz is the host of This Week in Mammoth Screen Dramas Fancast, a podcast devoted to following the production company behind Victoria. She is also the founder of the Poldark Costuming Project.
You might also like
MasterpieceNatalie SimpsonReviews
Read More 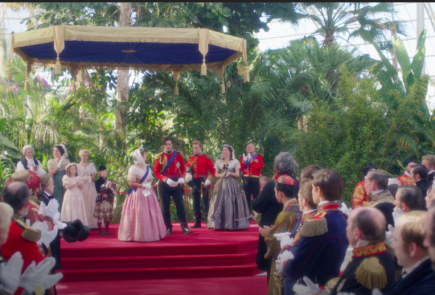 The Victoria Roundtable Marvelled at “The White Elephant”
Read More 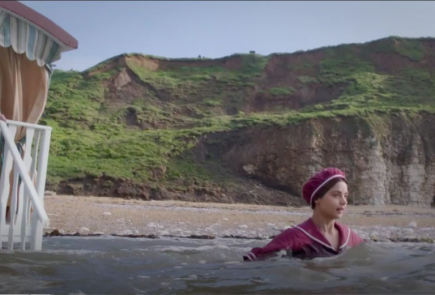 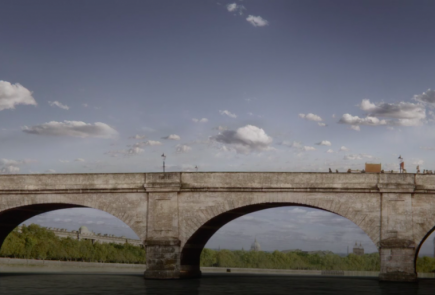