The fun of fantasy, fiction, and fanfare.
Sections
Conventions
CompareComparing...
105

Freeform’s Stitchers Is A Case Worth Solving

by Jennifer YenJuly 17, 2017
1
Now Reading
Freeform’s Stitchers Is A Case Worth Solving
Contents

“We have too much fun. We’re very lucky to work on a show that we really enjoy with people we love…except Kyle.”

Freeform returned to SDCC in 2017 with quite a lot of fanfare, bringing the original hit series Shadowhunters and Stitchers for panels and autographs. On Thursday, July 20, fans were able to sit down and hear the casts chat about their current season, behind the scenes shenanigans, and get sneak previews of what’s to come.

The day kicked off with Stitchers, which follows Kirsten Clark, a highly intelligent and persistent computer science student with the ability to hack into the minds of the recently deceased. Recruited into a covert government agency to be “stitched” into the memories of the dead, Kirsten and the Stitchers team investigate murders and solve mysteries. The panel was moderated by TV Guide’s Damian Holbrook, with executive producer Jeff Schechter and series stars Emma Ishta, Kyle Harris, Ritesh Rajan, and Damon Dayoub giving us the lowdown on the series and our favorite geek squad.

The panel began with an exclusive 10 minute preview to Stitchers 3X07 “Just the Two of Us,” and we were left with more questions than we started with! There’s definitely a lot of excitement around the Jeffrey Schechter and Matt Kanee written episode, which spends the majority of its time focused only on Cameron and Kirsten. Jeff explains that he was inspired to write this in part to his favorite Doctor Who episode, “Heaven Sent,” which features Peter Capaldi’s Doctor finding himself utterly alone and isolated. As Jeff describes himself,

“It’s a Chinese puzzle box of an episode.”

To say that this cast gets along is an understatement. From the first minute to the last, jokes and laughter were abound. When asked about the early days of the show, Kyle Harris mentioned that there was definitely a challenge to finding the right way to convey Cameron’s growing feelings for the temporally challenged Kirsten. He jokes,

“I (Cameron) fell in love with a robot girl.”

Emma Ishta talked about her own challenges taking on Kirsten, saying that she approached it as

“No woman is the same. Some are not likeable, and I think it’s important to have that.”

When it comes to Camsten and their current struggles, Jeff was quick to make clear that he was all for putting them together on episode one. However,

“We tried putting the two of them together…but then they turned into this perfect couple and even I got bored with that.”

The panel wasn’t all about Camsten, though, and soon Ritesh Rajan jumped in and talked about how the death of Linus’s dad is going to really affect the computer engineer this season.

“The death of his father propels him into massive growth this season…which is really important.”

He also joked that

As for our favorite LA cop, Damon Dayoub made a point of correcting the other cast members for continually referring to him as Quincy.

“It’s Detective Fisher…he didn’t go through all of detective school for nothing. They have schools for that, you know.”

Damon also had us rolling with laughter as he described filming the original pilot, during which he had a major wardrobe malfunction. As he tells us,

“The pants I was wearing was a little too tight. When I bent over to pick something up, I split the entire seam of my pants, ‘cause my butt is big, man!”

Jeff and the cast also teased that the fan favorite pairing of Maggie and Fisher are to be known as “Figgie,” before Emma prompted him to admit that when the original pilot was written, the intent was to give Kirsten and Fisher a chance at romance! Fishten or Kirsher, anyone? He then revealed the shirt he was wearing was the actual screen used shirts for Stinger! When it came time for the Q&A, things continued to be hilarious. When Kyle stated that he believed he was best at gaming when it came to Mario Kart, Damon quipped,

“Don’t you think everyone is good at Mario Kart?”

When asked about who they would like to stitch into when it came to live people, we cheered when Kyle commented

“Maybe the heads of Freeform to find out if Stitchers is renewed for season four!”

After being asked about Ivy, played by the lovely Sarah Davenport, Kyle answered,

“She’s a giant question mark, and is even so up until the very end.”

All joking aside, however, Damon spoke for the entire group when he said

“We have too much fun. We’re very lucky to work on a show that we really enjoy with people we love.”

This is just a snippet of the hilarity that ensued when the Stitchers cast and creator showed up here at SDCC 2017! Stay tuned for our cast interviews with Jeff, Emma, Kyle, Damon, and Ritesh.

There’s three more days of fun at San Diego Comic Con 2017, so be sure to join us and follow us on Instagram, Twitter, and Snapchat @HelloNerdeek!

STITCHERS MAY HAVE GOTTEN THE GEEK BALL ROLLING, BUT THERE’S SO MUCH MORE TO SEE AND DO HERE AT SDCC17!

Stay tuned to HelloNerdeek and TVAfterDark for more coverage of your favorite shows and movies!
likethis
What's your reaction?

Jennifer Yen
I'm a mind-reading geek MD during the day and Amazon bestselling author of YA fantasy series The Avalon Relics by night. I am a lover of great books, binger of television series, and enthusiastic fanfiction creator. I enjoy all things science fiction and fantasy, Marvel, and Disney/Pixar related. I'm a Trekkie, Jedi, Whovian, X-Phile, Shadowhunter, Stitcher, Potterhead, Browncoat, Tribute, Austenite, and so much more. I support diversity in all media and want to keep smart shows where they belong - on the air!
You might also like
Damon DayoubEmma IshtaConventions
Read More 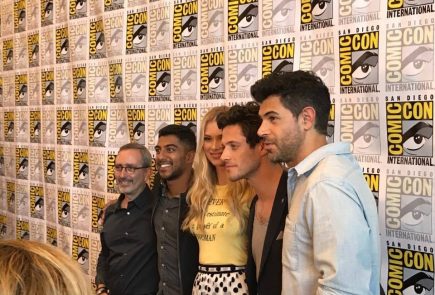 Freeform’s Stitchers Gets The Geek Going At SDCC 2017!
Read More 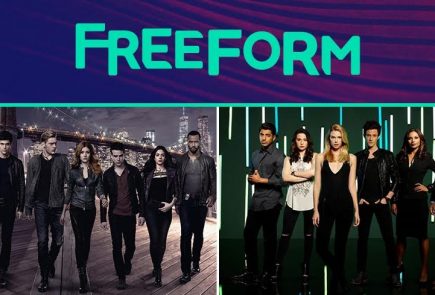 His Dark Materials: What We Learned at SDCC 2020

“Mercy Shall Follow Me” Shows No Mercy to Outlander Fans