Syfy’s The Expanse Stops On Earth At SDCC 2017

“It’s an education…we have to learn what this new toolbox can do and how things work differently.”

Martians, Belters, and Earthers put aside their differences for one day when Syfy’s critically acclaimed original series The Expanse touched down on Saturday, July 22nd at SDCC 2017. Based on the Hugo-nominated book series by Daniel Abraham and Ty Franck (under James S.A. Corey), The Expanse takes place hundreds of years in the future after humans have colonized the solar system. The cast and crew came together for a panel to discuss last season’s most shocking moments, and to give fans an idea of what’s to come for season three. Series stars Shohreh Aghdashloo, Frankie Adams, Dominique Tipper, Steven Strait, Cas Anvar, and Wes Catham were part of the group discussion. They were joined by executive producers Naren Shankar and Mark Fergus, and the panel was moderated by Dalton Ross.

RELATED | SYFY’S THE MAGICIANS IS SPELLBINDING AT SDCC 2017

We had a chance to chat with Dominique, Frankie, Shohreh, Steven, Cas,and Wes, as well as Naren and Daniel about what we can expect from the show and characters next season. They also answered some burning questions for us regarding their own alliances in The Expanse!

Naren and Daniel stopped by first to chat with us, and we asked them about the delicate balance between author and showrunner when it come to the source material. Daniel teasingly stated that

“It’s an ongoing process that really depends on how much blood sugar I have. I get hungry and I start yelling at them about things and they feed me and I’m very happy about it.”

“It really matters how much I’m ignoring him on any given day. You know what, we’re set up to adapt the story and certain things have to change. We have done things in the series that are not in the books, pulled characters from later in the series to earlier seasons. We have changed chronology and built storylines into the narrative, but that is a constant negotiation.”

When asked if there was a scene both felt was executed well, the two agreed when Naren mentioned

“Home. Yes, Home, it was one of my favorites because it’s beautiful in the books and it is beautiful on screen as well, and I feel like that’s one of the ones that we tried super hard to be faithful to.”

Steven and Dominique spoke to us about how the events of the season two finale will impact Naomi and Holden in the coming episodes. In fact, Dominique shared that the two will be

“In very opposite directions. I think based on the betrayal…so far they’re not doing too well.”

Now, while Nolden is one of the “ships” on the show, some viewers have been unable to ignore the chemistry between Naomi and Amos. When questioned about that, Dominique had this to say:

“As a romantic…I mean, he never was, so no! He’s equally brokenhearted by what she’s done, you know, they have a weird relationship. She’s like his moral compass and he’s like her protective wolf, and his opinion has completely changed of her now.”

When we grabbed Wes and Cas for a quick chat, we asked the former the same question. He immediately stated that

“Ultimately yes, I think he is okay (with Nolden). Naomi’s happiness is all that really matters to him and if this is the situation that’s working out and it’s good for her, then yeah. He’s not jealous like ordinary people are…if he says how he feels you can trust it…he’d do her if he had the chance but she’s not in so that’s fine.”

Asked where they hope their characters will go in season three, Cas told us that

“Alex has been very reactive in the past two seasons, he’s basically just trying to keep his family safe…he’s always been trying to keep it safe, keep it safe. What would be a really interesting journey to go on is for Alex to, on his own without the influence of the people who are much more opinionated, make a decision to get something done and do it on his own.”

Shohreh and Frankie came to tell us more about how Bobbie’s decision to seek out Chrisjen will affect the two characters in the future. When asked if there will be more to come, Shohreh says

“I’m hoping we’ll meet some of the other characters. It’s been the two of them for a long time, and it’s time to hang out with some new faces. People my age.”

Commenting on how The Expanse portrays powerful women on the show, Frankie had this to say:

“Being on such a diversified show portraying such healthy female roles. I’ve worked thirty nine years, and this is the first one. In this scale, the most diversified of everybody.”

With this fun of a cast and such dedicated showrunners and authors, we can only assume that when The Expanse returns for its next season, there will be many surprises, twists, and turns to look forward to! What are you hoping to see happen with the Belters, Martians, and Earthers? Tell us below!

WHILE EVERYONE TRIES TO SURVIVE THE WORLD-ENDING PROTO-MOLECULE, LET’S TAKE A MOMENT TO LOOK AROUND!

We’ve got more coverage on The Expanse and your other favorite shows while at SDCC 2017, so check it all out!

THE EXPANSE IS EXPECTED TO RETURN IN 2018 ON SYFY!

Want to see more?  Check out the full video interview below!

Jennifer Yen
I'm a mind-reading geek MD during the day and Amazon bestselling author of YA fantasy series The Avalon Relics by night. I am a lover of great books, binger of television series, and enthusiastic fanfiction creator. I enjoy all things science fiction and fantasy, Marvel, and Disney/Pixar related. I'm a Trekkie, Jedi, Whovian, X-Phile, Shadowhunter, Stitcher, Potterhead, Browncoat, Tribute, Austenite, and so much more. I support diversity in all media and want to keep smart shows where they belong - on the air!
You might also like
Frankie AdamsSan Diego Comic ConConventions
Read More 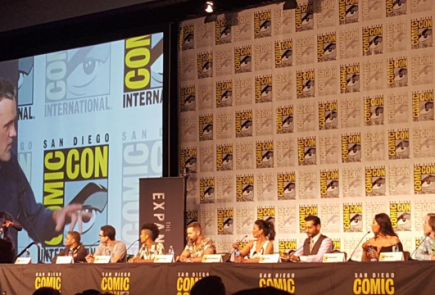